The Queen of Orgasm Control, Manchester Mistress Lola Ruin is about
to lock up Her slave for his longest stint in chastity to date...

Like all O/our sessions this one started with me kneeling naked on the floor of Her chambers, waiting for Mistress Lola. Within a few moments of Her having entered the room I was crouched in front of Her, worshipping Her feet as W/we talked about O/our last session together, and what I’d been thinking about since then.

It’s difficult to describe how much I’ve come to feel at home – as Mistress observed – while kissing Her feet. I can never help exhibiting transparent relish as I get to run my lips over Her instep, Her delicate toes… It always feels so far removed from my time outside O/our sessions, and yet always feels so natural. Even as I write this I can feel my chest swelling with helpless desire.

After a time Mistress stood and beckoned me over Her spanking bench. She was dressed in a purple latex skirt, a section at the back cut out to display Her bottom. I truly can’t describe it or my feelings about it in a way that does justice to either, so it will have to suffice to say that being allowed to worship Mistress Lola’s bottom is perhaps the part of O/our time together I long for and recall most powerfully between sessions, and that skirt in particular is a familiar object of fascination for a reason that I’ll explain in a later entry. 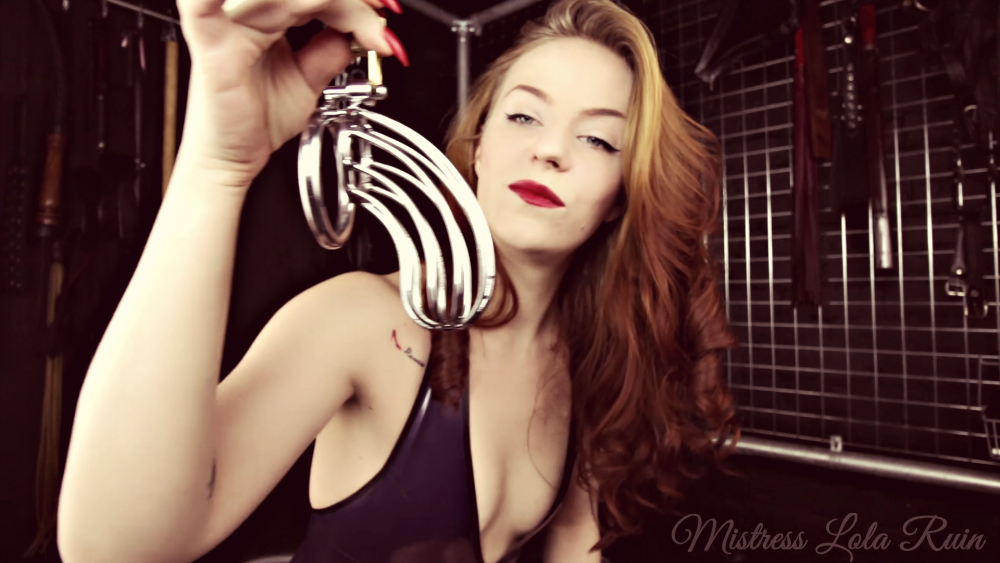 In order to earn the privilege of getting to worship Her, however, as usual I was going to have to go through a cold caning first. One hundred strokes was the minimum target for today, but despite knowing what was ahead of me I couldn’t help my cock stiffening as Mistress strapped me to the bench, her hair brushing over my back as she pulled the straps tight.

As normal the first couple of dozen strokes were by far the hardest, and before long Mistress was already commenting that I was marking up well (as I sit here I can still feel the throbbing pain of those strokes quite acutely…). As the number of the strokes started to climb I began to melt into that mental space with which other slaves will be familiar, losing all track of time and remaining aware only of Mistress Lola and the metronomic thud of Her cane against my flesh.

Once my caning and its aftercare were finished Mistress released me and bade me worship Her feet and legs, up to the hem of Her latex skirt, until I had recovered from my punishment. My shoulders and arms were still shaking with adrenaline when I started, but after a while it subsided and Mistress instructed me to lie down on a flat, leather bench. Within a few seconds I was again strapped down, this time face up, and blindfolded.

Instructing me to play with my cock, She began to lower Herself towards me, finally sitting over my face, my eager lips and nose buried beneath her skin. Again and again She smothered me under Her bottom, sometimes perching so that I had to strain against my straps to kiss Her, only to lower Herself again on top of me. Whenever my mind wanders from what I’m doing during any waking hour this is what I think about, and although I think Mistress Lola knows how much I relish these moments at the time and cherish them afterwards, it’s impossible to communicate it here.

Eventually Mistress stood and told me that O/our session had finished. As W/we had planned she instructed me to put on the chastity cage I had brought with me and, frustrated, denied a last release, I did so. I handed over the keys to my lock for Mistress’s safekeeping, still flushed with all the sensations from the session, and looking forward (I think) to all the sensations of the weeks to come…

I’m writing this quite late at night. I woke up with my cage on this morning, and although as normal I became at once aware of my cock pressing inside it, it didn’t feel as alien and out-of-place as it sometimes has in the past. It perhaps helps in that regard that my bottom is still very sore from its caning yesterday (with plenty of lovely marks!), so that the sensation of the plastic cage is scarcely uppermost in my mind.

However, Mistress has devised a cure for that: I am about to lie in bed and watch a custom video clip She filmed for me for these occasions, reminding me that She holds the keys to my cage, as well as how excited I get about worshipping Her (featuring the purple latex skirt from O/our session yesterday…).

You can imagine how effective this is during even short stints in chastity, and with a bit less than three weeks of denial in front of me I suspect its effects will be quite acute, never mind anything else that Mistress Lola has in store for me…

I’ve spent practically the whole morning in a state of unassuageable desire. As the pain of my caning a couple of days ago has subsided, so has the feeling of confinement become harder to ignore. I had already resolved, therefore, to write today’s diary entry quite early in the day, and I’d just sat down to get to work when I decided to browse Mistress Lola’s fan’s site.

I can therefore report proudly (maybe a little too proudly) that as I write this I’m also fulfilling Mistress’s slave task for the day and wearing (if that’s the right verb) a rubber butt plug to go with my plastic chastity cage. I’m certain I would have been erect – or as close as I can get to it while inside the cage – without it, but with the plug inside me that’s assured.

Since it feels consistent with my position for the next couple of weeks or so, I’m going to put up with the plug for as long as I can, and go back through Mistress’s videos and find one in particular I’d been reserving to watch this week, knowing I’d be locked up for it. Time will tell if this is a good idea, but it feels like an appropriate one.

This was the first morning so far that being in chastity seems to have cost me sleep, at least during this period of confinement: I woke up in the very early, dark hours of the morning and couldn’t relax enough to get back to sleep. The cruel irony – although only in the mildest terms, of course – is that normally under these circumstances I could have treated myself to a really great orgasm, the sort that really only comes with that restless, primitive vigour of feeling so full of lust so early in the day. Obviously that won’t be an option for quite a few days yet…